The last day of the rally Jim gave his new Google Earth seminar. That's fun stuff. I think the best comment was from a woman in the audience that said, "My husband's gonna starve." Meaning, she couldn't wait to get her hands on Google Earth at her computer and she expects to stay there for hours or days to come!

And I had lots of people coming up to me to say that they created their Blogs after my seminar. I consider that a rousing success, especially since last week was about the worst week to be using Blogger. They had all sorts of internal problems. I think Datastorm Users are probably the cream of the crop in being able to handle computer problems and persevere to appreciate the benefits. It's all a matter of attitude!

The following two photos sum up the rally for me. This first one, I call 'Gather Round the Guru' And it represents the fact that people came here to learn, and there were lots of gurus here to learn from!

The second one is of the VP of Motosat being a good sport and wearing the funny hat given to him. It represents the unparalleled access we had to the manufacturer of our equipment. The rally had about 110 Motosat customers, not really a very high percentage of their overall customer base. Both the president of the company and the Vice President were there for one-on-one conversations. AND - the head of Technical Support and ISP services were there the entire week troubleshooting and fixing problems free for the asking. 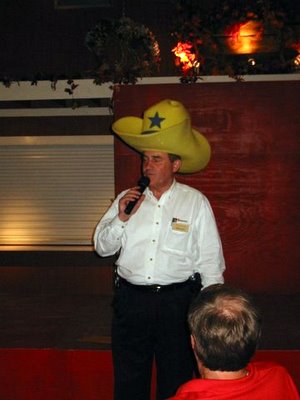 Thanx to Joline for the photo above. And - I probably should have taken a picture of him when he was in Joline's coach at 10:00 at night helping her figure out a problem!